Last year, we wrote an article about two catalysts from the notorious Ford Focus model – numbers 0019316 and 001a575. Today we would like to present you two other models that also appear in Focus. These are catalysts 001A574 and 0019315B. 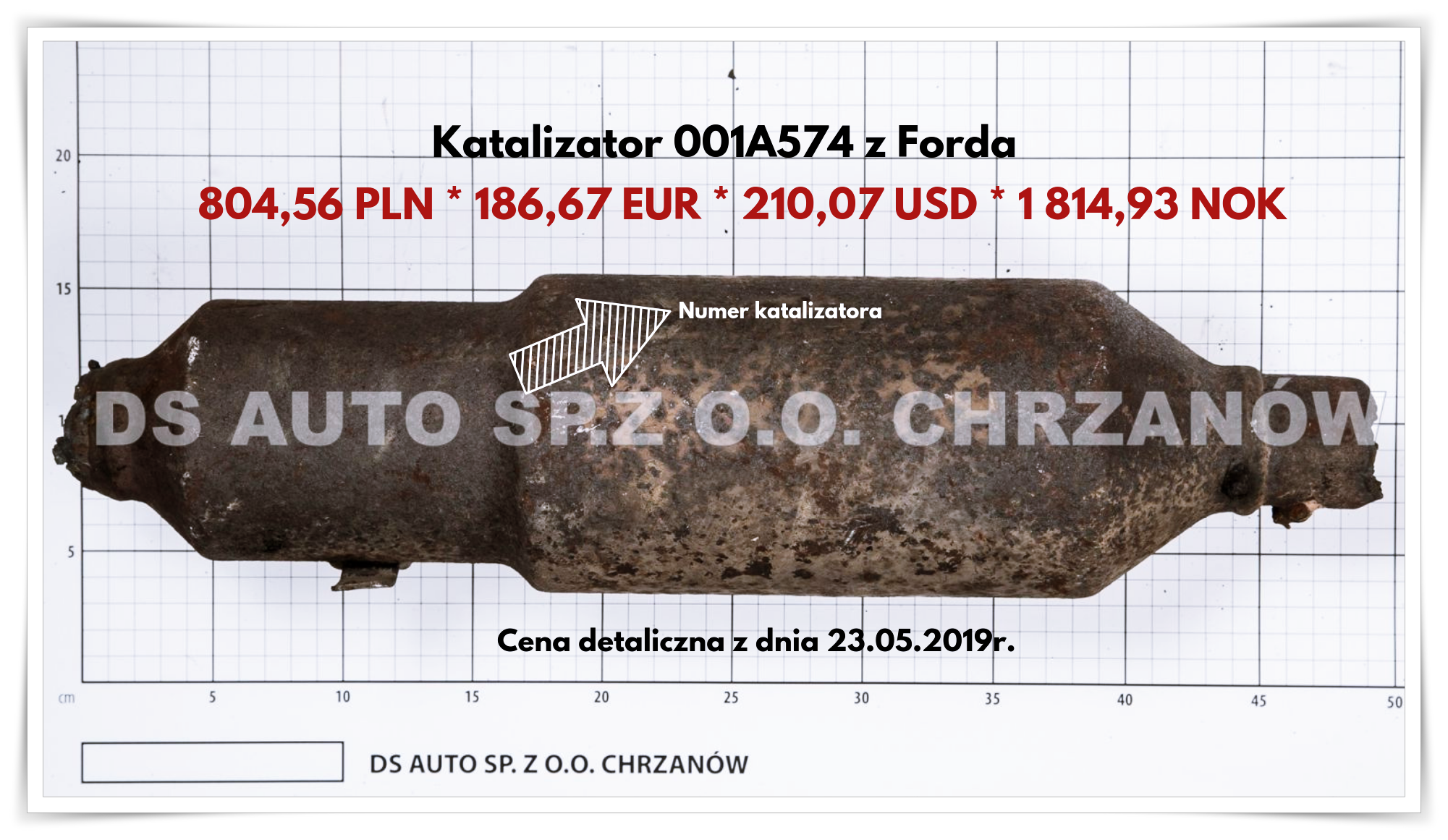 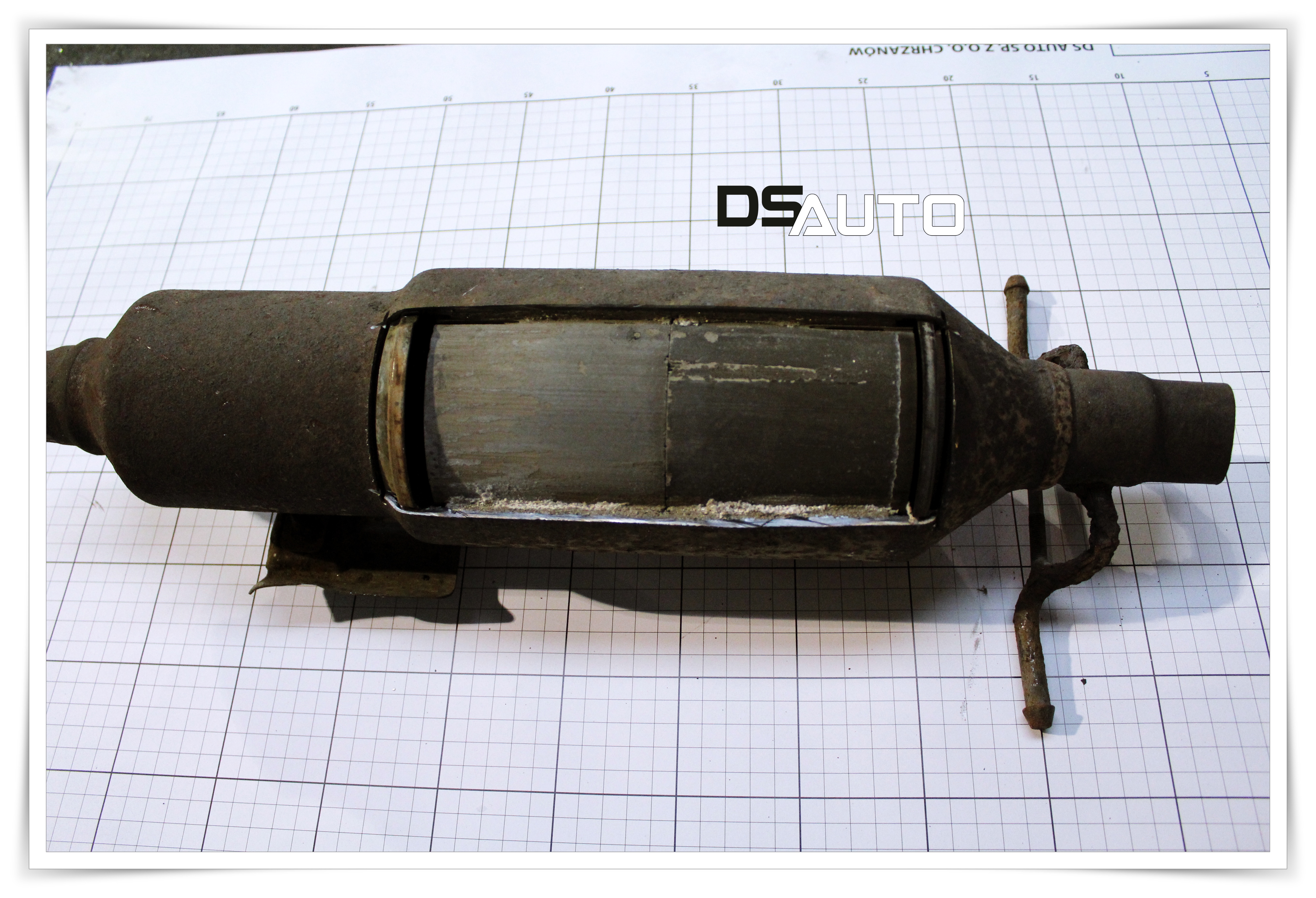 Similarly to the two models described earlier, in the case of 001A574, there are two ceramic inserts inside, which have been sprayed with precious metals in various ways. One of them contains more valuable elements than the other.

Catalyst 0019315B comes from Focus 2.0 from 1999. It is easy to recognize because it resembles a fish shape. One of the outlets is a large hole, the other ends with an extension of the cover. The edges around the entire catalyst are flattened. There are also two ceramic inlays here. 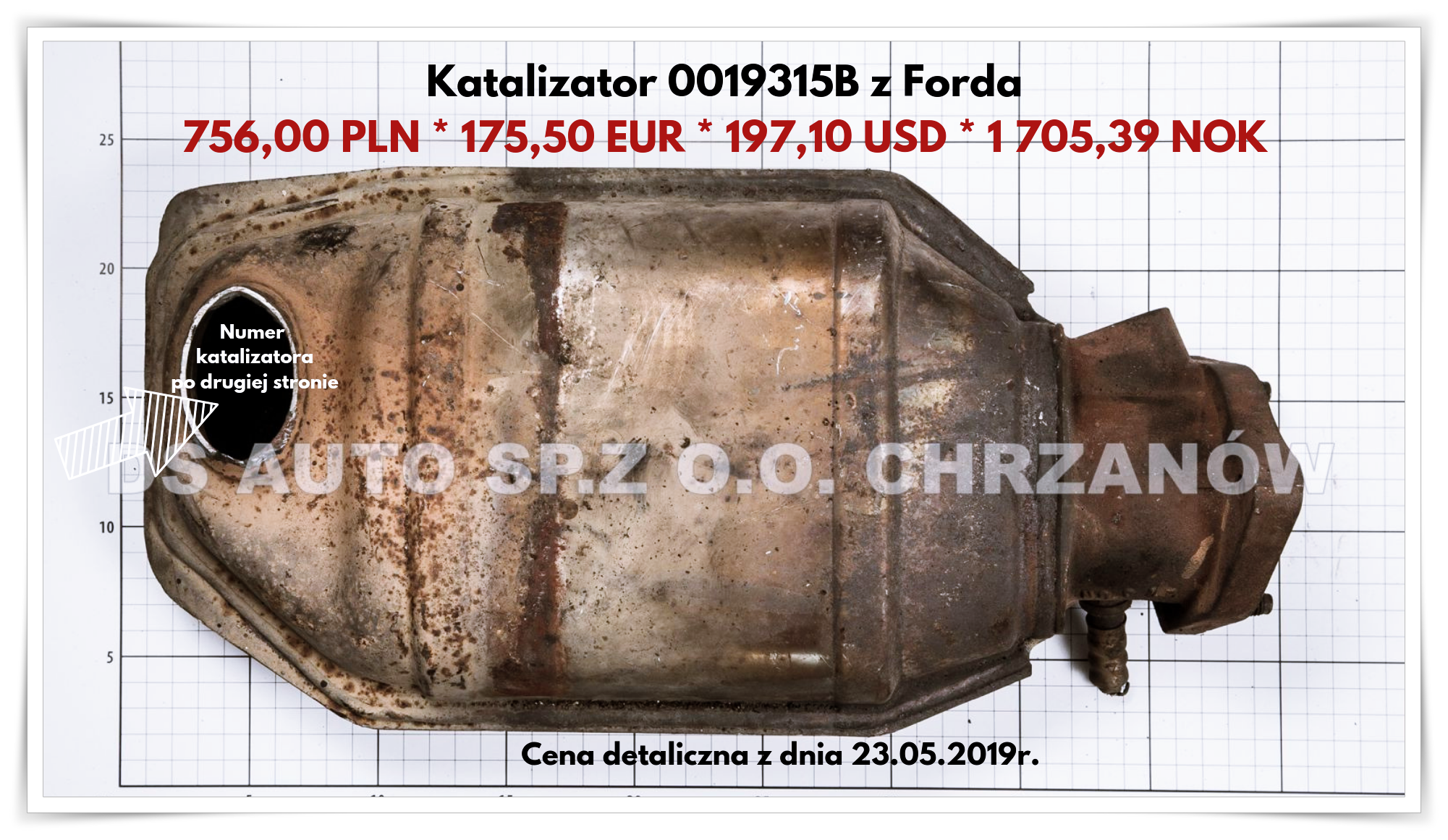 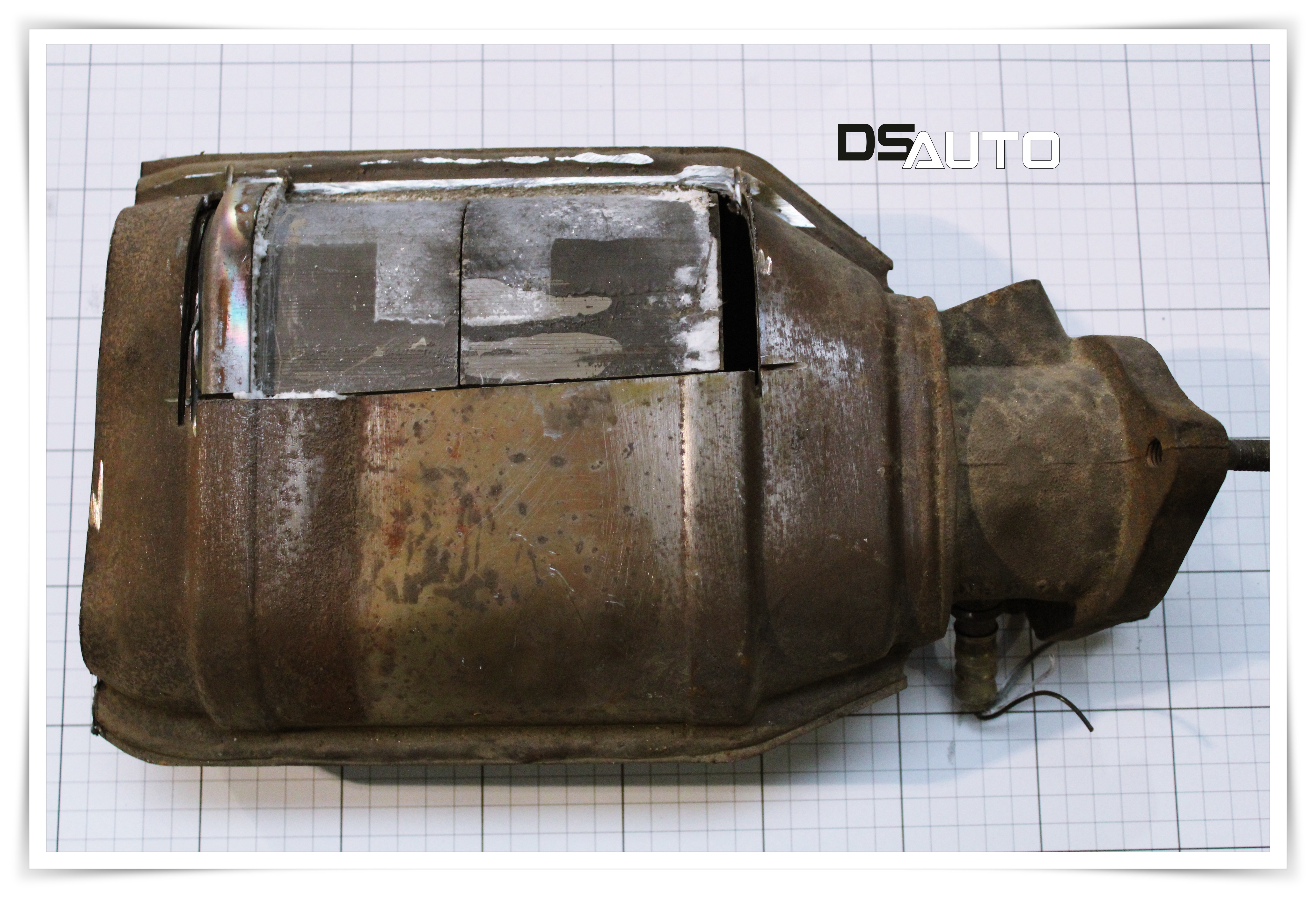 What is worth mentioning about Focus, what has not been said the last time?

The car comes from segment C, which means a lower average class when it comes to global classification. For the European market, Focus was introduced in 1998, while in North America, it only appeared two years later.

The first generation had a lot to do with Ford Ka. The same solutions have been applied in the design of the body – namely, tense and angular lines. Numerous security measures have been implemented – airbags and the ABS system. The rich version of Ghia included facilities such as air conditioning, CD radio, cruise control, on-board computer, electric adjustable seats and windows, as well as an ESP system. Focus was then produced in Germany, in Saarlouis, and in Valencia in Spain. Due to the great interest in the car, in 2002 production was also launched in Russia (St. Petersburg), Mexico, Argentina and the USA. In addition to the version of Ghia, which we have already mentioned, the car was sold in the Ambiente (basic) version, and Trend, later called Zetec (sport version). The richest version of the equipment had a logo on the back door, chrome inserts in the rear plate holder, and the dashboard was two-colored. There were also two-tone armchairs. The steering wheel, gear knobs and the handbrake lever were covered with leather and the chrome handles.

The Trend sports version (renamed later on Zetec), stood out only with a different grid, honeycomb, presence of fog lights and 15-inch alloy wheels, shaped like a five-pointed star. However, in our opinion, it is not enough to call a sports model.

The most popular variant was the estate car, which was launched in 1999.

In 2002, the sport version of Focus RS (Rally Sport) was introduced, to which the designers inspired the WRC racing model. The car was used by Collin McRae, Carlos Sainz and Markko Martin, who were competing in world rallies at the time. RS retained the aesthetics of the basic model. 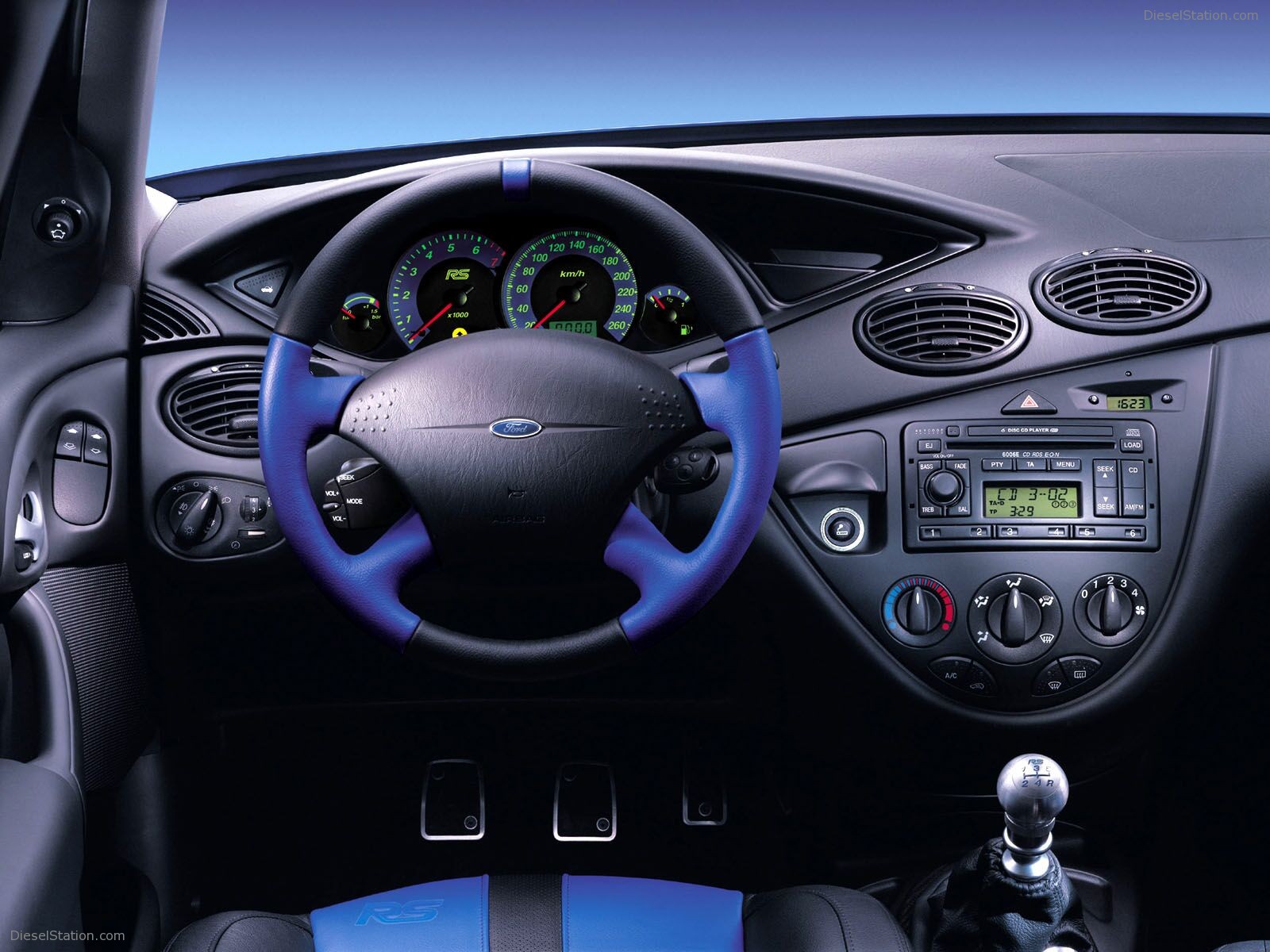 The vehicle was built based on the T230 prototype made in cooperation with Mountune, GMD and Gordon Spooner Racing.

The second series was presented for the first time in September 2004 during the Car Show in Paris. For its production, the Ford C1 platform was used, which was also used in the Volvo S40, V50, C70, Mazda 3 and Ford Focusie C-MAX models. The car was wider, longer and higher than in the first version. It was also decided to enlarge the trunk. The model was modernized by adding the KayFree system, heat reflective windows, adaptive headlights and Bluetooth. The range of engines with new models produced by the PSA group was also retrofitted.

Also in the second generation, it was decided to introduce a sports version – Focus ST (Sport Technologies). It was shown to the world in 2005. It was powered by the same engine as the Volvo T5

In 2006, the CC version – Coupé-Cabriolet – appeared. The model was designed in Turin, in the Pininfarina plant. What made this car special was the presence of an electrically tough roof. It was divided into two steel parts that could be opened or closed in 29 seconds. The cabriolet has been equipped with a 1.6-liter 74 kW (101 hp) gasoline engine, a 2.0-liter 107 kW (145 hp) gasoline engine and a 2.0-liter 100 kW diesel engine (136 hp).

Other models of Ford catalytic converters can be found in our catalog.