Catalyst number VW GOLF STANDARD occurs in models Jetta, Polo and as the name suggests Golf with a 1.3 engine from 1992. The weight of the contribution is 1.04 kg, and the size is about 47 cm long and 13 cm wide. Its characteristic appearance is distinguished by a perforated plate protecting the catalyst against damage. The current price of this catalyst can be checked on our website. 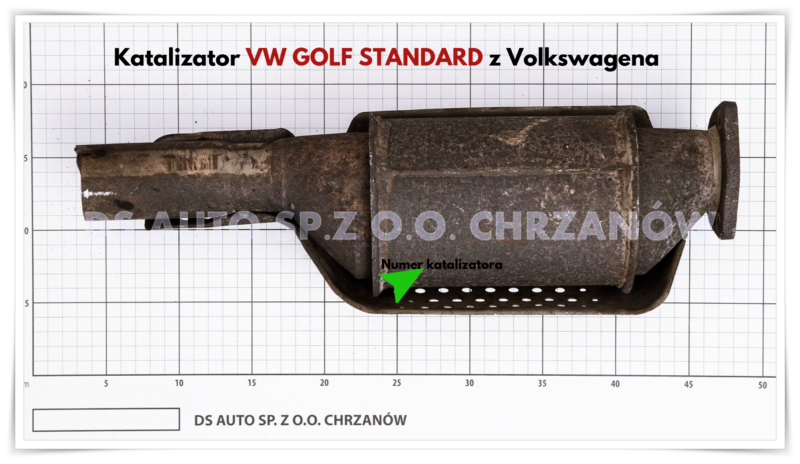 VW JETTA is a compact car belonging to the C and D segment border. It was manufactured for the first time in 1979 by a German brand Volkwagen. In 2018, the 6th generation of this model was released, which means that it has been on the market for 40 years.

The first generation of this model was produced in 1979-1983, it appeared for the first time at the Frankfurt Motor Show. The manufacturer’s intention was to create a vehicle that would become a sedan version of the flagship model of the brand – Volkwagen Golf. This car by its version of the body was definitely larger, more prestigious, and thus slightly more expensive than its brother model.
Most of the technical things were taken from the Golf model. Rectangular headlights have become a monotonous element in VW models, which have become a characteristic attribute of vehicles. The otherness of the models was mainly the use of different types of body.
During the first generation, the manufacturer offered as many as five gasoline engines with powers from 50 to 112 km and two diesel engines that generated power from 54 to 70 km.
By the time the second model series was released, over 600,000 models had been created.

The second generation of the vehicle entered the market in 1984. This model could be found under the name A2, Type 16 or 1G. After a year of presence on the European market, the manufacturer decided to release the vehicle on the American market. In order to save on production, the manufacturer started technological cooperation with other automotive concerns. Due to this situation, Jetta Mk II shares a lot of elements with Golf II, Corrado or Seat Toledo. Jetta II was offered in two body variants, a four-door sedan and a two-door coupe.
The most pronounced modifications that were introduced with the new version are definitely the size of the vehicle, and thus also the capacity, this time the vehicle could easily fit 5 people in the car. Obtaining a more streamlined appearance of the body certainly influenced the clearer elegance of the car. The headlights, which were included during the first generation, were still used in the improved version, only the rear headlights were changed, which were significantly different from those installed in the VW Golf II.
In 1998, the vehicle underwent a face-lift under which the appearance of the body was changed. The main focus was on the sphere around the license plate, where a plastic blend was added which glued the plate giving it a more refined look. In addition to this modification, bumpers have also been improved, which have been integrated with the lower part of the front of the so-called hokejkami.

Volkswagen In addition to manufacturing its model in Europe and the United States, it also began production in Mexico, Bosnia and Herzegovina, Nigeria, South Africa and China.
The most popular drive units were gasoline engines with a capacity of 1.3 l and 54 km, 1.6 l with 69-75 km, 1.8 l 84-98 km. In diesel engines it was limited to a 1.6-liter unit with 54 km of power with TD designation, which allowed it to squeeze 60, 69 or 80 km from the engine.

The third generation of the vehicle was first presented in 1991, this time in Europe it was presented under the changed name Vento. Initially, the car was sold only on the European market, only after two years from the debut of the third version, the model was introduced to the American market under the name unchanged Jetta. Despite the difference in names, the next Volkswagen model did not differ much in technical terms. Certainly a visible change was once again getting even more streamlined silhouette of the vehicle. As in previous generations, the car was built on a floor plate adopted from the next generation of Golf, i.e. the Golf III model.

The fourth generation of the Jetta IV adopted the European name Bora. The original naming has been preserved in North America and South Africa, where the vehicle enjoyed the greatest popularity. The model was presented for the first time in 1998. This time the car was built on the floor plate from VW A4 PQ34, which was used for such models as Golf IV, Skoda Octavia or Seat Toledo II.
Volkswagen Bora is definitely an improved version of the Golf IV. Not only that, the Jetty also appeared in the station wagon for the first time. Stylistically and technically, Volkswagen Bora was associated with the Volkswagen Passat and, as in the case of earlier models, its twin Golf model. The most powerful engines in this generation turned out to be gasoline engines with a capacity of 2.8 VR6 and a power of 204 km, where this unit was offered only with all-wheel drive. Compared to its predecessor, the new generation of the model was slightly shorter, but higher and wider. The new version of the model looked more fresh and modern. The bumpers were color-compatible with the body, which gave it an elegant look. The headlights still remained in their characteristic rectangular appearance. Depending on the choice of equipment version, the car contained, among others ABS and ESP system, two or four airbags, electric windows, electric windows and sunroof, power steering, air conditioning, heated seats, satellite navigation system, as well as a choice of automatic or manual transmission. The most popular power units in this generation were gasoline engines with a capacity of 1.4 and 75 km, 1.6 and 100 km 1.8 Motion with 125 km and a powerful version of the vehicle 2.3 VR5 with 150 km. In the case of diesel units, the manufacturer offered 1.9-liter engines in versions from 68 km SDI to the most powerful 150 km TDI.
Production of this generation ended in 2005.

The next, fifth generation of the model was first presented in 2005 at the Los Angeles Motor Show. After experiments related to changing the debut name, the manufacturer decided to return to the original title of the model, i.e. Jetta V. As in previous models, the Jetta is still built on the basis of a floor from Golf, this time in version V. This car has already undergone a wide metamorphosis and has become extremely practical model. The trunk in this vehicle is definitely roomy and amounts to 527 liters. A strong attribute of the model is the suspension, which allows you to perform certain maneuvers. The low center of gravity contributes to dynamic cornering.
The interior of the Jetta is largely taken from the twin brother of the Golf V. This vehicle model is definitely a model made on a high level of materials, making Jetta a successful design that combines the features of a compact car with a sedan.

The sixth generation of the model began in 2010 and was presented at Time Square in New York. Although the vehicle still shares the floor plate with the Golf, this time the vehicles are no longer as closely related visually. In 2012, a hybrid version of this model appeared, which was presented at the Los Angeles Motor Show. The United States proved to be the main market for the vehicle, where the car is very popular.
In addition to the hybrid presentation, you can buy gasoline and diesel engines in standard offers. The most popular in this generation is the 1.4-liter engine that achieves power of 122 or 160 km. Sport emotions are provided by the 2.0 TSI 200 km unit. In the case of diesel, the 2.0 TDI engine with a power of 140 km, which ensures good vehicle dynamics, deserves attention.
The interior of the car was made of high quality materials. Standard vehicle equipment includes ABS with ESP, electric window control, electric mirror control, front airbags, central locking, radio, air conditioning, heated side mirrors. Good power units and reliable driving are gaining their supporters all over the world.

Currently, the 2018 seventh generation of the Jetty has already appeared, where it was presented at the Detroit motor show. Unfortunately, this vehicle is not available on European markets. The main country for which this model generation was created is the United States, where this vehicle model has already managed to firmly enter the hearts of Americans.