Catalyst GM22/90530748/F7/F8 F9 is the catalyst used in the Opel Astra engine with 1.4 engine power and gasoline. The catalyst weighs 1.33 kg and is about 50 cm long. Its shape is oblong and slightly asymmetrical, and the outlet on one side is slightly longer than the other. 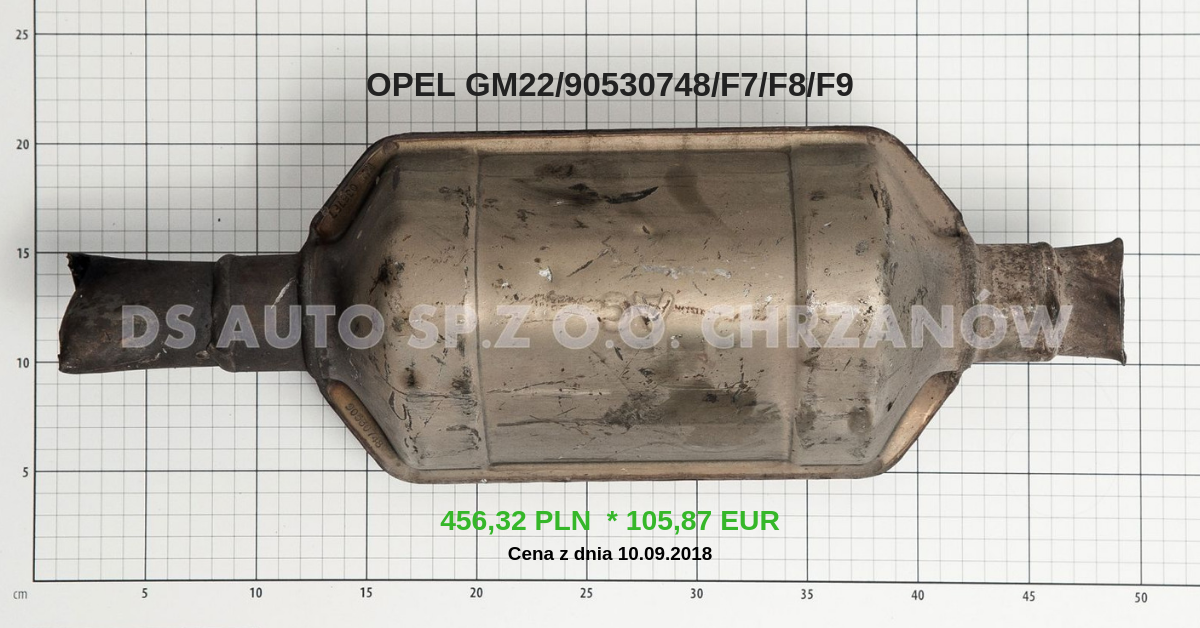 Opel Astra 1.4 – a compact car produced by the US corporation General Motors, even though Opel is a German brand. The car made its debut in 1991 as Opel Astra F (Opel Astra Classic), which was produced until 2002, when it was replaced by Astra G (Opel Astra Classic II). The next models are Astra H (Classic III), Astra J and the latest version – Astra K from 2015, which was produced by PSA. This version won the title of the European Car of the Year in 2016. She then overtook Mazda MX-5 and Volvo XC90. 40 models were competitors, which made a sensation on the European market. Together with VW Golf and Ford Focus, it is a model that has been fighting for popularity in the compact car segment since the 1990s.

These cars are classified as segment C (lower middle class). Right after Corsa, it is the most popular model when it comes to Opel. His production turned out to be a great and expensive undertaking, involving as many as 8,000 experts.

The car can be purchased in the following versions: sedan, hatchback, liftback, estate, cabriolet and coupe.

Potential buyers have a wide range of choices when it comes to engines. They are able to guarantee good performance and low operating costs. The best of the engines has a power of 200 hp. The car is characterized by an elegant and comfortable interior. Many spare parts can be found at low prices. However, it is worth adding some money and choosing parts from the middle shelf to enjoy them longer. The most frequently mentioned defects include poor silencing and frequent failures of the gearbox. Corrosion is also a frequent and unpleasant problem. Initially, the whole body was galvanized. Later, however, some elements were limited. It is worth intervening even with the smallest damage to the paint, to prevent rust.

The average combustion is in the range from 3.5 l-9.5 l per 100 km depending on the engine used. Ecotec 1.8 and 2.0 gasoline engines are the most recommended.

Despite the fact that Astra, as many fans of the brand underline, is a boring car, it enjoys great popularity not only on Polish streets.