As you already know, precious metal prices are constantly changing. Their value at a given moment depends on many different factors. You also know that we are closely monitoring the changes in courses, because they are the most important applications in the automotive industry – in the production of car catalysts. They perform their proper catalytic function and purify the exhaust gases from toxic substances.

Every week, together with Unimetal Recycling, we present you weekly analysis, summarizing what has happened on the precious metals market. This is extremely important for us and our contractors, because the current prices depend on the prices of over 7 800 models of used catalysts from our catalog.

The higher the rates on a given day, the higher the catalysts have. Hence our keen interest in global trends.

We have recently been able to inform you about the record results achieved by palladium. In recent weeks, this metal has achieved a very strong position on the precious metals market. Several times we wrote about historical courses – including the highest so far, amounting to 1 576.60 USD / ounce. This value, palladium, reached March 21 this year. 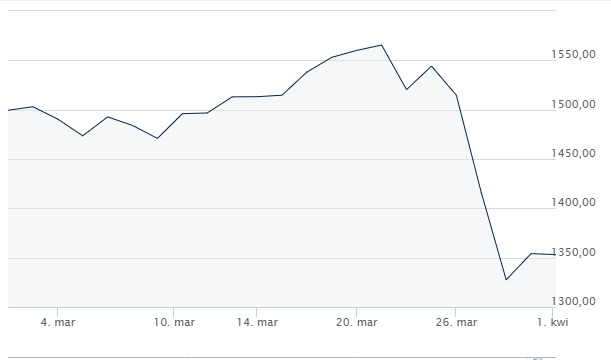 The price increase of this noble element was not a big surprise for anyone, considering that automotive concerns are rapidly withdrawing from further production of diesels (in which platinum is used). Palladium has become more expensive than gold and platinum, increasing its value by as much as 250% in the last 3 years. Everything through the dieselgate scandal, which we have often mentioned recently. In addition, the sales results of ecological hybrid and electric vehicles are not spectacular.

Companies will therefore bet on gasoline-powered cars. In these vehicles, palladium catalysts are assembled. It would seem, therefore, that the course will continue to grow. In the end, there is a lot of demand, so the matter seemed simple.

It turns out, however, that it is not entirely. Last week we had a huge drop in quotations. A decline that many did not expect. The last few sessions on the metal exchange, significantly cooled the euphoria and optimism of people who invest in palladium. Within a few days, the ozone was cheaper by as much as 11%, and on Wednesday only by as much as 6%, which is the highest one-day drop in almost 20 years.

There has been a certain deficit in palladium for many years. The market needs are big. However, demand may be reduced due to fears of an economic slowdown. It is also worth mentioning that Russia has announced to the world the decision to reduce the extraction of the element. The possible reason is the desire to extort even higher prices on other market players.

The predictions regarding the further fate of palladium are very diverse. As you can see, no scenario is predetermined. Our expectations are not always reflected in reality. It’s worth getting ready for the next good news from us regarding the next records, but at the same time we have to prepare for the next drastic drops, turbulence and unexpected twists and turns.

Current rates of precious metals can be found in the “Courses” tab.

The prices of used catalysts, in our price list.