Catalyst number 46481722 – LanciKatalizatory number 46481722 was used in the production of Italian Lancia, Fiat and Alfa Romeo cars. The catalyst housing forms a flat body with transverse recesses and two symmetrical outlets. The device’s length is 40 cm and the weight is less than 1.4 kg. 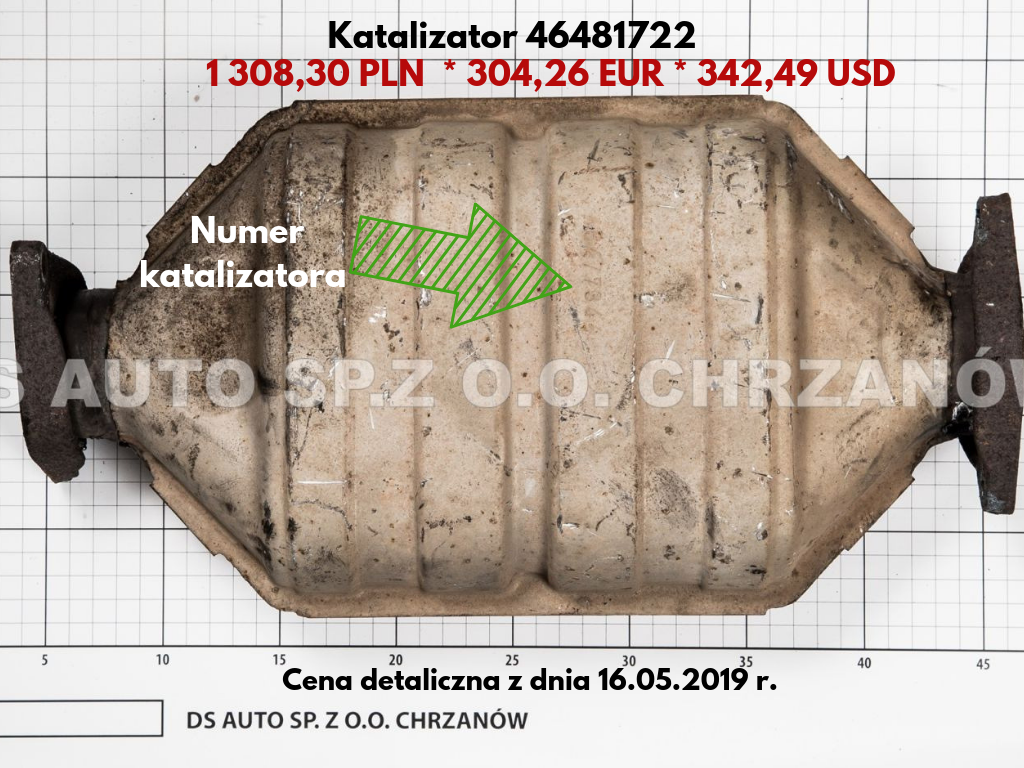 The 46481722 catalysts were used, among others in the Lancia Lybra model (with 1.8 gasoline engine, in the years 1999-2005), which we have not mentioned on our blog yet. Today, we will introduce you to the history of the car and its specifics.

Lancia Lybra is a car that was produced by the Italian manufacturer Lancia, in the years from 1998 to 2005, first in the Fiat plant in Rivalta, and then in Mirafiori.

The model was created to replace the old Leder Dedra. The production uses the “Type 2 evolution 3” floor designed for Alfa Romeo 156, but with a different and more comfortable suspension.

The car was available from the moment of release as a sedan and estate car. It was assembled during the first years on the assembly lines of the Rivalta plant, and in 2002 it moved to Mirafiori, where the car was produced with the 1.6 16V engine version. Other engines, such as 1.8 VVT 16v, 2.0 20v gasoline, and the renowned Turbodiesel JTD 8v and 10v, were produced at the Pratola Serra factory in Avellino. Diesel engines were the most popular because they offered excellent fuel consumption, high reliability and efficiency – higher than declared.

An interesting fact is that the car was advertised by an American actor, Harrison Ford.

The corporation was keen to let Lancia become a premium brand, and in the marketing message the car was always presented as comfortable and elegant. Also so as not to create additional competition for the sporty Alfa Romeo 156.

Most of the models built went to the domestic market. In Italy, Lybra was successful, especially in the first sales period, when advertising activities were intensified. Often it was chosen as a company car thanks to the luxurious LX version with Alcantara upholstery.

However, success in Italy did not last too long. First of all, due to the lack of stylistic and technological updates that the Fiat Group would have to face to resume sales in the middle of their career. Petrol engines, transmissions, electronics, passenger cabin remained the same throughout all the years of production. The only thing that has been improved is the addition of several horsepower to diesel engines. However, this was not enough to compete with more and more competition.

A total of 181,307 cars were sold. In July 2006, production rights were transferred to the Chinese company Zotye, which originally planned to re-launch the car in its home country, but the project was abandoned.