MATIZ catalysts are used by Daewoo. They are small in size, they measure about 25 cm in length and weigh less than half a kilogram. They are characterized by a fairly symmetrical and at the same time obtuse shape. They have a metal shell, which is an extension of the cover that runs along the entire catalyst. On March 6, 2019, the retail price is PLN 105.02 (EUR 24.42). It is higher by around 15% than at competitive collection points. The catalyst numbers are not placed on the casing, so they are often confused with universal replacements. 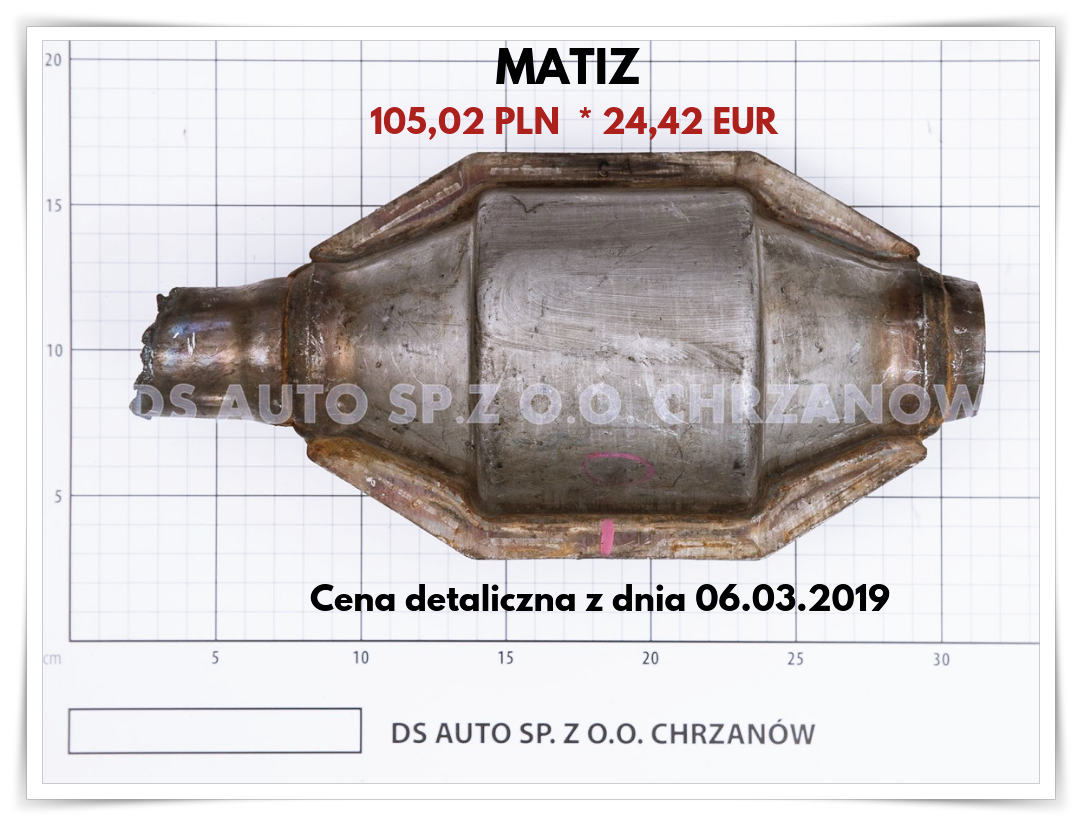 MATIZ catalysts are used by the Daewoo brand in the Matiz 0.8 model from 1998, the petrol version. The producer was Ismeretlen.

Matiz is a compact car, produced by the Korean automotive concern Daewoo from 1998 to 2007. It was this model that became the successor of the popular Daewoo Tico in our country. His name is literally translated as “friend”. The genesis of the car should be associated with Italy. Daewoo was interested in the design of the Italdesign Lucciola model, by Giorgetto Giugiaro, which was presented in Bologna in 1993. It was an ecological vehicle, with hybrid drive and aluminum body, which was easy to recycle. The car was characterized by oval headlights, a folding roof and armchairs that could be easily manipulated. Fiat has abandoned the production of this model due to too high costs and excessive risk that design will not like it and the investment will not pay back.

Daewoo decided to take the risk. Works on the project lasted as many as 29 months! Already in March 1998, Matiz went to the Korean streets. 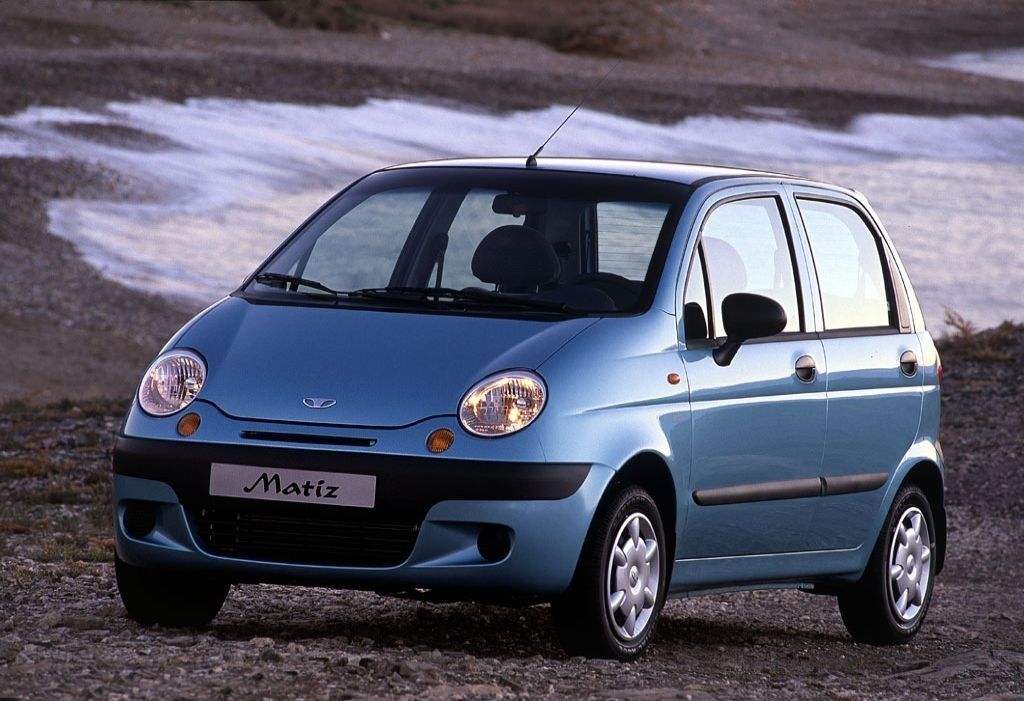 He achieved the greatest success in Italy, where he was most afraid of selling it. There he was sold until 2004 as Matiz. From 2005-2010, in turn, sold as Chevrolet, after the Korean company took over General Motors. In some markets it was sold as a Chevrolet Spark, which it was replaced in 2009.

The first generation was sold in the years 1999-2007. The advertisement started already in 1997 after the official presentation at the car showroom in Seoul. In order for the car to differ from the concept version from 1992 and to emphasize the flexibility of the solutions used, a decision was made to redesign the model and decided on a classic system with five doors. This resulted in the car being very successful all over Europe. Despite the small size reaching 3.49 m, the car was classified as a minivan designed for five people. What about convenience? – you ask … Is it a small car that can be comfortable despite its small size?

It turns out that it is probably not possible to design such a small space in a more functional way. In this small car you can really hold a lot. After folding the rear seats, we get a luggage rack tailored to a large station wagon. 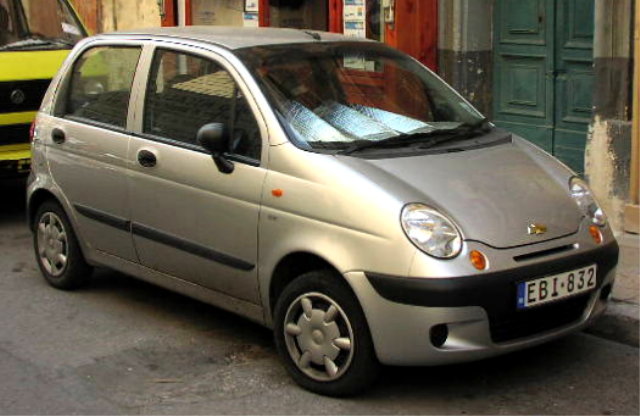 In addition, Matiz took off in 9 color versions. What distinguishes him most is the maximum rounded shapes and the short front, thus providing excellent visibility. The whole is complemented by slightly arched circular arches and oval mirrors. During the Euro NCAP crash tests, Matiz scored 3 stars out of a possible 5. Today, this may not seem like a stunning result, but then it was more than satisfactory result. In terms of security, it is also worth mentioning the ABS or EBD system installed in it as well as the anti-burglary bars in the door. Initially, it was only produced in South Korea and dedicated to local markets. Later, production was begun in Warsaw, where Daewoo used the facilities developed by FSO. The success of the first generation was confirmed by statistical data, which unequivocally announced – by the end of 2002, 500,000 were sold in Europe. copies, including Italy alone, 157 thousand

In 2002, Daewoo Auto & Technology underwent a financial crisis and was bought by General Motors, which carried out a total modernization of the entire range of vehicles. Already in February the following year, a 1.0-liter four-cylinder gasoline engine was added. After 2005, the entire fleet was sold on the European market as Chevrolet. The first generation had a total of 1.4 million units. 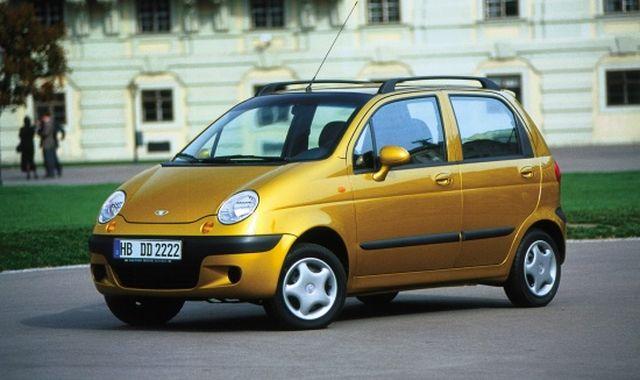 The second generation of the car, which was produced after 2005, was the model Chevrolet M3 X Concept, which was first shown to the world in 2004 at the Paris Motor Show. The final version was shown at the Geneva Motor Show in 2005. The car has been redesigned, but the characteristic features of rounded and soft shapes have not been abandoned. This time, however, more complex lights were used that connect to the bonnet, air baffles and optional fog lights were placed in the bumpers, and the wheel arches were raised. In addition, it was decided to finish the rear with a concave window, and the rear fog lights were placed on the lower bumpers. It has also been made that the interior look more comfortable and spacious. Interestingly, the second generation achieved a worse result in the crash tests than the first one. He managed to get only 2.5 stars.

It is also worth mentioning how the car was promoted. Their advertisements have always appealed to emotions, evoking associations with love or passion, as they were aimed mainly at women or young people.

We also invite you to check the current prices of used catalysts from other models of the brand in our price list.