The FP72 catalytic converter is mounted in Mazda, specifically in the 626 model. This catalyst is characterized by a flat, elongated shape with numerous recesses and perforations in the casing. Its length with outlets is about half a meter long, and the weight is less than 1.20 kg.

The most common problems with this model are the strong corrosion of the sheet, which additionally causes the numbers to be unreadable. In addition, the cover tends to fall off. All this effectively hinders the proper identification of the model, and thus – problems with the appropriate valuation.

To avoid this type of situation and such a significant undervaluation, we should use specialized points that have adequate facilities to carry out such difficult valuations. Then, even without the cover you will get a fair payment, because the purchasing company will carry out XRF analysis in your laboratory using a spectrometer. The information about the amounts of platinum, palladium and rhodium contained in the catalyst will be obtained from the milled and homogenised material respectively. The valuation prepared in this way will always be the most advantageous for you. 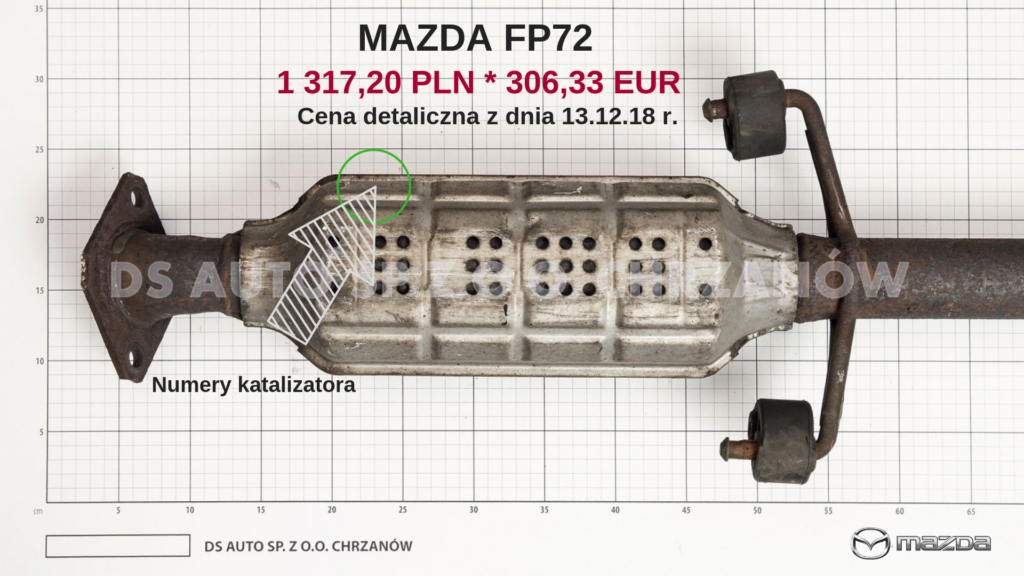 FP72 occurs in Mazda 626 – a well-known vehicle from the country of the blossoming cherry. Known in his home country as Mazda Capella, on the European market more commonly known as Mazda 626. 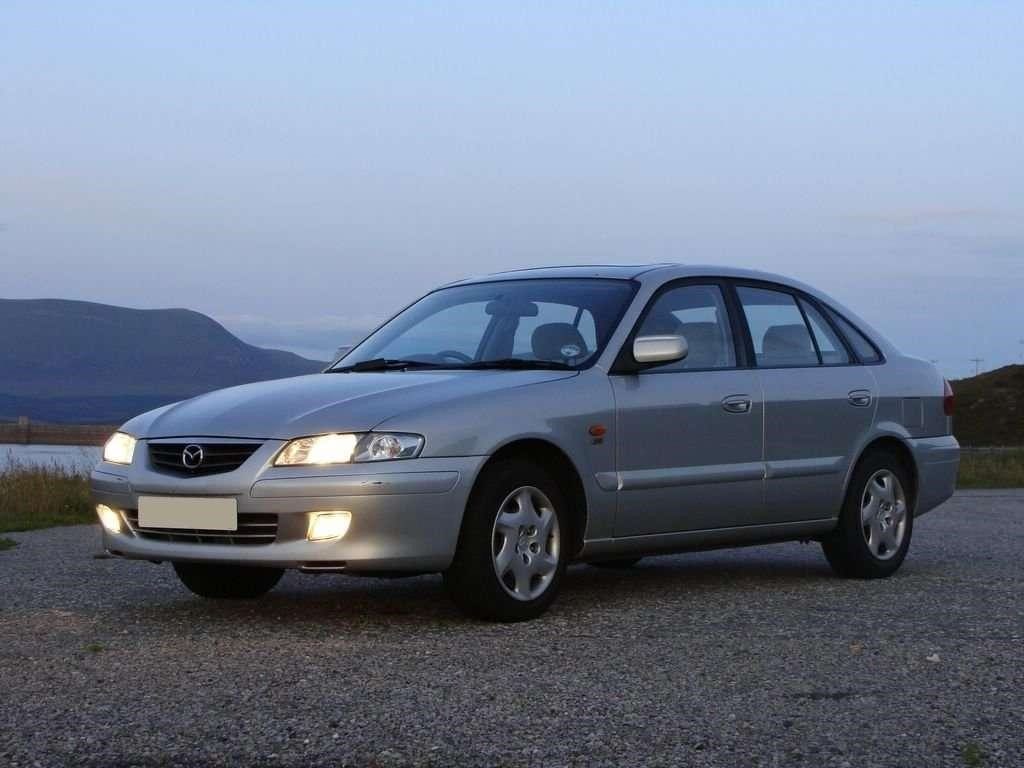 The original name – Capella, originated from the brightest star of the Auriga constellation. It was produced in the years 1970-2002. During that time, over 4,345,000 vehicles were sold. The car chassis was also used to create the Ford Telstar and Probe models.

The car was to compete with the then-growing Honda fans Accord and Nissan Bluebird.

The first generation of the model was introduced in May 1970 and was produced until 1978. Introduced as an alternative to the smaller Mazda Familia and larger Mazda Luce. First-generation cars were driven by four-cylinder SOHC valve engines with a capacity of 1.5 or 1.6 liters, with a power of 68 or 74 kW. During the production, the appearance of the rear lights has been modified many times. The first generation was dedicated to foreign markets as the Mazda 616 in the sedan version, and in some countries the model with the coupé type was sold. For some time the vehicle was sold in the USA as Mazda 618.

The Wankel engine was available as an additional option in the model called Capella Rotary in Japan or Mazda RX-2 in other countries. In 1974, the first major facelift was carried out. During this time, the front was extended by 11 cm and the desktop was modified. 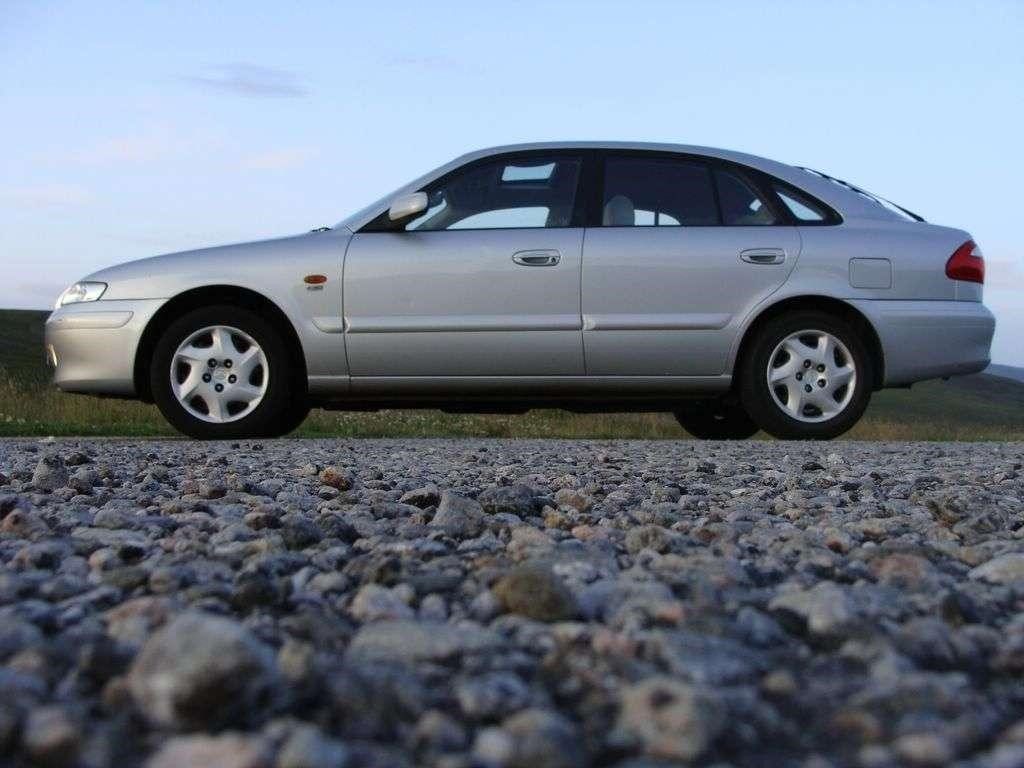 In the years 1977-1982, the second generation of the model appeared. In all export markets, the model was sold under the name Mazda 626, and only in the United Kingdom as Mazda Montrose. The third generation of Capella already appeared in 1983. As before, the export version was offered as Mazda 626, and in some markets the car with a slightly modified body was named Ford Telstar. In 1987 the production of the next generation Mazda Capella began. It was already a “middle class” car, because the GD platform on which this car was assembled was updated, and in 1993 the structure underwent further changes, starting with the new GE platform.

As a result, Mazda Cronos appeared on the Japanese market as one of the Mazda Capella versions. The fifth generation of the model was produced in the years 1994-1997, and the sixth in the years 1997-2002. The year 1999 turned out to be a breakthrough. An additional change was made. Capella’s successor was Mazda Atenza, better known outside of Japan as Mazda 6. In total, 6 Mazda 626 cars were built. They were available in the form of a 4-door sedan, a 5-door estate and a 2-door Coupé. The Sedan had almost the same equipment as the other types. However, it gave the impression of being less sporty and had four-wheel disc brakes than the other versions. In addition, it was equipped with front, side airbags, as well as larger wheels. The body dimensions of the most massive sedan in the 1994 version are 4595/1695/1395 mm at the base of 2610 mm. The vehicle’s own weight is 1160 kg, depending on the type of transmission.