Today life and quite a common situation. You buy a car in a better or worse condition. You have been using it for thousands of miles over the years. Finally, there is the idea that this well-deserved vehicle should be replaced with a newer model. Sometimes the desire to have a better, more modern and fulfilling our expectations prompts us. Sometimes our decision accelerates the more and more often appearing mechanical defects, in which we do not want to fix ourselves. Regardless of whether we decide to sell a car at a low price or scrape, it may surprise us that the catalyst derived from it will prove more valuable than the car itself. Why is this happening?

Diversity on the catalyst market

Cars depending on the make, model and even country for which they are designed differ in terms of the catalysts installed, and more precisely in terms of the amount of precious metals contained in them – platinum, palladium and rhodium. You have probably heard about the exhaust cleanliness standards. These are the regulations specifying the amount of exhaust gas released from the exhaust system. In different countries and for different periods of time, these rules were shaped in a different way. The more demanding the standard, the more precious metals were used in the production of catalysts. They are responsible for the purification of exhaust gases from toxic substances. So much for theory.

Where does the catalyst price come from?

In practice, even a used catalyst can be worth a lot. Prices range from a few dozen zlotys if a substitute is involved, up to 11 thousand zlotys for the most expensive catalytic converters from Mercedes. The price difference is of course dependent on the amount of precious metals. The more they are, the more valuable the catalyst is. There are also changes in exchange rates here.

As you know, the price of precious metals, in which many people invest, is variable. The process of determining their value is quite complicated. The price is influenced by various political, economic, and sometimes social factors. However, everything comes down to the demand for a given ore. The greater the demand for a given metal, the higher its price.

One of the situations that has recently had a significant impact on the precious metal prices and, consequently, the prices of used catalysts, is the Dieselgate scandal into which well-known automotive concerns were involved. In September 2015, what many of us had expected for a long time came to light. The results from the exhaust measurements were misrepresented. Special software was installed in the cars whose task was to manipulate the obtained results. People have become aware of the fact that cars burn more fuel and emit more harmful fumes than the producers claimed. Fraud took place all over the world. Since then, cars with a diesel engine have been assigned the greatest responsibility for the state of the air we breathe. In view of the changes adopted by the European Parliament, the concerns have therefore decided to stop producing diesel, in favor of gasoline, hybrid and electric cars. However, for the last two variants we are reluctant to decide. Despite their environmental performance, it turns out that they do not break the popularity records. This applies not only to Poland but also to other European countries. There are plenty of reasons – high purchase and operating costs, too slow development of infrastructure or various prejudices that can be read about on internet forums. It is also worth paying attention to the fact that theoretically ecological cars use electricity. To produce it and then send it over the net, it is necessary to burn non-organic fossil fuels.

The result is that the eyes of consumers turned towards cars with a well-known gasoline engine.

World trends and the price of the catalyst

It is worth knowing that for the catalysts used in petrol, palladium and rhodium are used in particular. In turn, platinum is used for diesels. As you might have guessed, the “automotive revolution” has strongly influenced the prices of the above metals, and so, for several months, we can see a gradual increase in the palladium and rhodium rate, and in the case of palladium, the price of an ounce has reached historical record high several times. we noted on March 21 and amounted to PLN 1 576.60 / ounce. 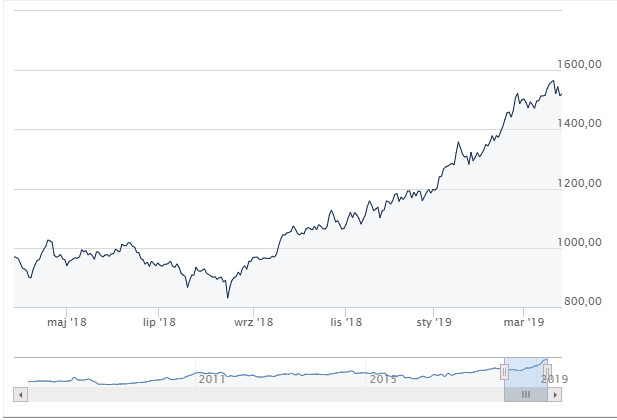 The results of changes in the quotations can be easily seen in our catalog. Palladium catalysts grow in strength and become more and more expensive. Prices can often exceed the value of the car. 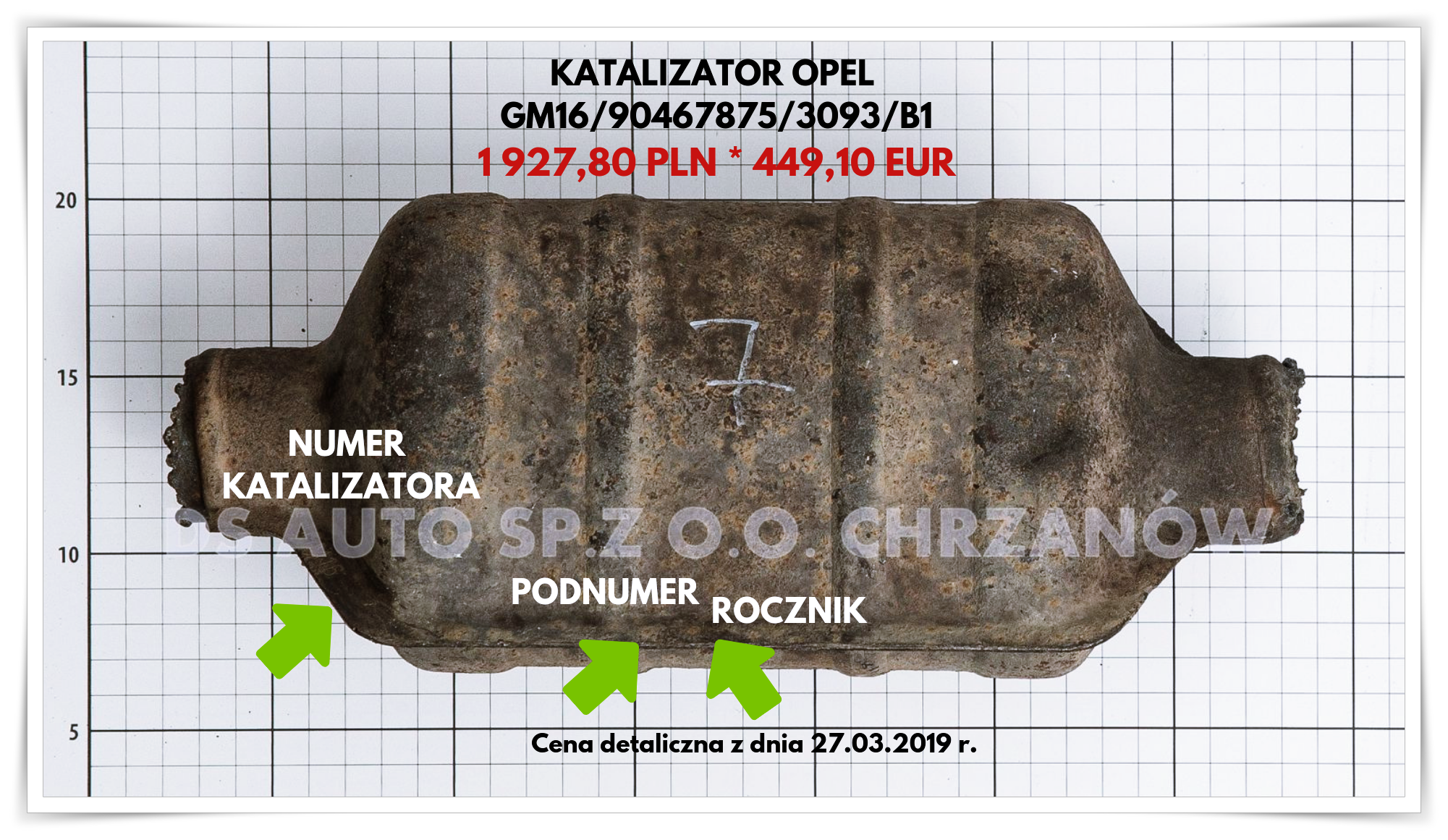 Where did its high price come from? From the elemental composition. The monolithic laboratory analysis carried out by us using the XRF method showed that 12 2890 ppm of this element was used for the production of this catalyst, that is 12,289 g of palladium per kilogram. Why we used so much palladium in the GM16 catalysts here.

What is important when selling catalysts?

You can legally sell the used catalyst at the point of purchase. As you can see, you can earn a lot on it and save on buying a new device. However, in order to get the most out of it and get the best possible price, it is necessary to choose the appropriate purchase. The best in which it takes place comprehensively: purchase, analysis and valuation and conversion of the catalyst. In this way, you avoid intermediaries. In addition, the price of the consumed part is calculated on the basis of the precious metal content in the model and their current rates. A purchasing company, in order to offer you the real price, must have its own laboratory. The laboratory, which is equipped with modern spectrometers to conduct the analysis and which create people with appropriate knowledge and experience. Without this, it is impossible to reliably determine the value of catalysts.

In DS AUTO, all of the stages listed above are held on-site. We buy from you catalysts, which we mark, weigh, recover a monolith and grind the material to obtain a uniform test. We analyze it and make a fair valuation. In addition, with wholesale quantities, we can offer our own means of transport, which will enable us to supply up to 24 tons of catalysts. We have our own laboratory with qualified staff. Why is it so important? Because it happens that the numbers of catalysts, after which we identify them are invisible, the catalyst sold is rare, or you sell us the monolith itself. Then, only chemical analysis allows to determine the value of the good. The whole process is open and legal.

We have all the permits and entries required for BDO (Registration number: 000037545)

Thanks to the CatCatalog application created by us, all our partner stores have a tool for conducting a professional quote. There are over 70 of our partner points across Poland, where you can sell individual items without any problem. However, if the nearest purchase is too far away and you do not want to move out of the garage, take advantage of the mail order purchase. Choose any courier company and send the used catalyst to one of them. Remember, however, to make an appointment with the selected purchase in advance.

In case you run a vehicle dismantling station or purchase catalysts, contact us and take a permanent cooperation that pays off. You get a quote tool, free advertising as a partner point and substantive help.

How do you check our catalyst prices? Take a look at the catalog.