C53/7700411008 catalysts are used by the renowned French corporation, Renault. We have already had the opportunity to present their characteristics and build the model even if we have articles about such devices as C72 or C196/8200145056. It is worth noting, however, that it is a palladium catalyst, containing two ceramic inserts, one of which is smaller, but more saturated with the already mentioned precious metal. The total weight of the cartridge is 0.969 kg. 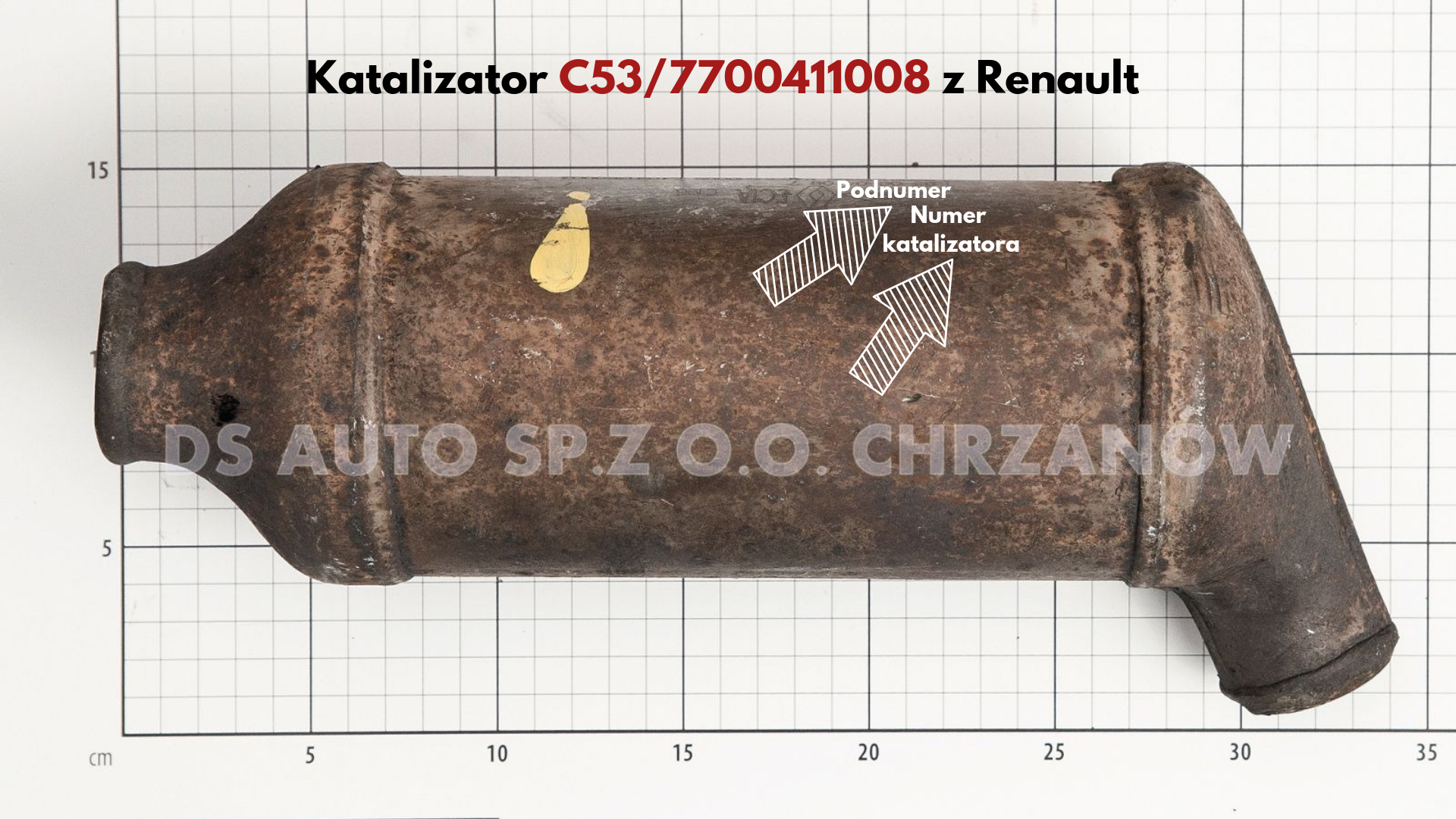 Renault Kangoo is a car made by a French company Renault. It was the long-awaited successor of the Renault 4. The car is based on the concept study of Renault Pangea. The first cars left the Maubeuge factory in 1997.

Renault Kangoo can be described as a response to the design trend of vehicles in the 90s. The customers who were most satisfied with the use were those with larger families seeking space, comfort and security. Usable space offered by Kangoo could be categorized as a minivan today.

At the time, it was the car that had the largest luggage compartment of all Renault cars. Therefore, the target group of customers was not only larger families, but also companies that used this car for business purposes. They were especially popular in versions with diesel engines to create the right conditions for dynamics at low speeds. They were offered with a 1149 cc engine with 60 hp and then 1390 cc with a 75 hp, 1870 cc and 65 hp diesel engine.

The first generation was modernized in 2002. Since then, models with a new engine and innovative design have been offered. The 1.2 engine had eight additional valves and had 75 hp, and 1.6 16 V, with 95 hp. The engine range was joined by 1.9 dTi with turbocharging and direct injection of diesel into the cylinder, and later 1.5 dCi with direct injection under high pressure, completed with a turbocharger, which has a power of 48 – 63 kW. Just before the arrival of the new generation of the model in 2008, the engines were available: 1.2 16V, 1.6 16V and 1.5 dCi – 50 and 63 kW.

Renault Kangoo of the first generation went to the European markets under the Kangoo Storia brand with a limited selection of engines and equipment (only 1.2 16 V and dCi 70) by 2010. In the markets of South America, its production is still continuing. In the spring of 2013, the car underwent another modernization, which changed the shape of the radiator grille, just like all current Renault models, it had a large company logo.

In 2008, a new, second generation of this car appeared. It is more spacious, stronger and more comfortable. It was focused on its approximation to the type of MPV, characterized by a high body, good interior organization, numerous solutions that increase the comfort of driving as a large number of storage spaces, or the possibilities that provides sliding seats. The chassis is now the same as in the second generation of Renault Scénic. At the same time, there are new functions that are responsible for comfort and safety (airbags, ESP, uphill start support, automatic air conditioning, rain and light sensor, Carminat TomTom navigation system, heated seats, electric rear windows, etc.). In 2011, there was a slight modernization that changed the appearance of the front bumper (so-called Generation 2011).

In 2013, there was a facelift, thanks to which the front part of the car gained lightness. The design of the rear lights has also been slightly changed. A steering wheel from the 3rd generation Renault Mégane was installed, and the offer of car and navigation systems (currently Renault R-Link) was also expanded. From 2014, the ESP system is the standard on the European markets. The new version is an Extreme version, which has a greater ground clearance, plastic protection of the sides of the body and both bumpers, but it is still a car with front-wheel drive. The 1.6 16V 105 engine was replaced by the new TCe 115 engine with a six-speed manual transmission. From 2015, all engines comply with the Euro 6 emissions standard and are standard equipped with the Stop & Start system (marked as S & S).

Current prices of the C53/7700411008 catalyst outside the promotion and other Renault models, you will always find on our website.